Review: My Life in Middlemarch 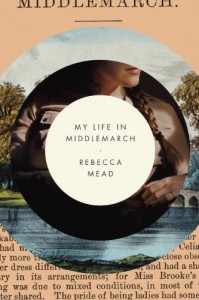 While I’ve read probably close to a dozen books that can be classified as bibliomemoir, this is the first I’ve encountered that focuses on a single book as opposed to a selection or progression of many. Rebecca Mead has both physical and emotional ties to Middlemarch, having grown up in the same sort of provincial English town that lies at the heart of George Eliot’s work. Like Eliot and her creation Dorothea Brooke, in her youth Mead was full of restless ambition and saw in Dorothea a mirror of herself. While this initial fellow feeling created a strong attachment to Middlemarch, Mead explores the way each fresh reading created new sensations, as age, experience, and circumstance brought different needs to the text and her own life.

Mead balances her examination of Eliot’s life and work with her own experience adroitly, mostly by placing the majority of her focus on Eliot. Mead is insightful and has a way of capturing Eliot’s defining work in a way that makes me want to read it again to see what she sees. Middlemarch, and Eliot’s work in general, was not a formative reading experience for me; that is reserved (cliché though it may be) for Jane Austen. But since I have experienced something similar in revisiting a great work at different times in my life, I appreciate Mead’s superior skill in conveying what is usually a fairly complicated tangle of literary and personal development, and especially admire her ability to show us aspects of her life without turning it into the sole focus.

While determining whether or not to pick up My Life in Middlemarch, I went back and read a few reviews from major literary outlets. I was excited to see Joyce Carol Oates wrote the review for The New York Times, and I thought much of what she had to say was intriguing enough that I ended up checking the book out from my library. However, having now read the book myself, I’m not so keen on Oates’ analysis. I don’t typically like to write a review that refutes another, but her words kept coming back to me as I began setting down my own impressions of Mead’s book. There is something ironic, maybe even a little bit meta about Oates writing about Mead writing about Eliot, especially as Oates focuses on Mead’s ability to forgo overshadowing the novel with her own experience, while in turn passing her own judgments on Mead and Eliot that carry a whiff of snobbery. I’m sure this adds yet another weird meta-layer; here I am, writing about Oates writing about Mead writing about Eliot. It’s enough to give you a headache, but I can’t seem to resist.

I respect Oates as an author and as a critic. I agree with many of Oates’ observations, like how “[t]here is no irony or postmodernist posturing in Mead’s forthright, unequivocal and unwavering endorsement of George Eliot as both a great novelist and a role model for bright, ambitious, provincially born girls like herself…” Perhaps it is this lack of irony in Mead’s work that prompted Oates to supply her own, as just a few paragraphs later we find her remarking on Mead’s choice of Middlemarch in tones that have more than a little “posturing” of superiority. She observes:

There is something self-limiting if not solipsistic about focusing so narrowly on a single novel through the course of one’s life, as if there were not countless other, perhaps more unsettling, more original, more turbulent, more astonishing, more aesthetically exciting and more intellectually challenging novels — James Joyce’s “Ulysses,” to name one; Fyodor Dostoyevsky’s “Crime and Punishment,” to name another.

This is where I began to lose patience. Perhaps there are “better” books, “more original” writers than Eliot that Mead could have chosen, but this isn’t a work concerned with pure literary criticism, or of taking the usual tactics of bibliomemoir and doing a multi-title reading history of the author. It is true that, as Oates observes, Mead does not supply any “surprises…that have not been uncovered by Eliot biographers,” but she isn’t writing Eliot’s biography. Perhaps Oates would have done well to take another look at the title of the book itself: MY LIFE in Middlemarch. Not “Eliot’s Life in Middlemarch,” or “George Eliot and Middlemarch,” or “Middlemarch is the Best Book Ever and Here’s Why.” This is a book that seeks to explore the personal, often inexplicable connection Mead has experienced with Eliot’s (perhaps greatest) work. The most frustrating part of this is that Oates closes her review on this sour note, suggesting that the book is passably good, but would have been better if Mead had somehow managed to forge a lifelong emotional connection with a better book. Then again, maybe it is also ironic, for me personally, that Oates compares Eliot to Austen (my most influential writer), both being in her words “genteel” and “oblivious to the physical…lives of women.” It would seem she would judge my reading experience in the same light as she does Mead’s, though I will never be able to articulate it half so well, and deep down maybe I feel it as a personal insult of my own reading choices.

This, I think, brings us finally to the point. My Life in Middlemarch seeks to do something difficult, something that involves putting into words an elemental attachment to a work of literature produced over a century and a half ago. She gives us something unequivocally a matter of personal taste and experience. How do we explain those works that have spoken to us most powerfully? Should we apologize when those works don’t meet a certain literary standard? Or be embarrassed if the thing we love somehow falls short of others’ expectations of merit? Mead does a beautiful job of taking something rooted in emotion and shaping it into a narrative that is enlightening (about Eliot, but also about reading, and living) and quietly touching; Mead’s enthusiasm never founders, but neither does it gush. Perhaps it is the lack of histrionics that make it seem easy to dismiss as not “surprising” enough for certain readers, but it is Mead’s measured study of two lives, hers and Eliot’s, combined with a deep and abiding appreciation for Eliot’s work, that gives it resonance. Every reader has a book in which they’ve lived a life and felt an almost sublime connection, and sometimes that book really is merely a “mundane, grand domestic adventure.” But it is our adventure.

Cross-posted on Goodreads: My Life in Middlemarch