Review: I Am Princess X 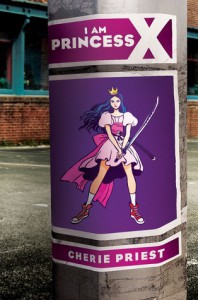 (I really should stop reading other people’s reviews before writing my own. In this case, I noticed that nearly every reviewer who began with something like “I received an ARC of this minus the artwork” gave it a depressingly low score. Well, DUH. The artwork is an integral part of the story; unlike a lot of computer gimmickry inserted into novels, the web comics interspersed through the narrative function as a very important aspect of the overall mystery, and there are quite a few backstory items in them that don’t get explained in the text. So reviewing minus those elements is not giving the book a fair shake. It’s like skipping the footnotes in Jonathan Strange and Mr. Norrell or House of Leaves-- you lose half of what makes the story work, both textually and aesthetically. Why any publisher would think it wise to release for review without the artwork is beyond my comprehension. But enough ranting.)

Cherie Priest is not quite a household name yet, but she is pretty well known in steampunk and alternate-history fan circles. I Am Princess X falls into neither category, though like a lot of her work, it blends together multiple genres to create something that is difficult to pigeonhole. It fuses old-fashioned mystery, techno thriller, fairy tale, and graphic novel elements to tell the story of an intensely loyal friendship.

Libby and May are best friends. They spend their time doing typical middle school girl stuff, but they have also constructed an elaborate fictional universe surrounding the character they call Princess X. Drawn by Libby and written by May, the stories of the fierce warrior princess in puffy sleeves and Chuck Taylor high tops fill notebook after notebook. But it doesn’t last. After Libby and her mother die in a car accident, the boxes of Princess X creations are given away by Libby’s grieving father, and May is left bereft of both her best friend and the world they created together. Three years later, Princess X makes a sudden reappearance, in the form of an underground web comic with a cult following. Despite everything that has happened, May knows Libby is the only person who could possibly be behind it. This theory leads to a series of increasingly dangerous events that pit May against a twisted conspiracy and an even more twisted adversary.

The mystery and the suspense are really well done, but what makes this book stand out from other YA novels of a similar bent is the focus on female friendship and ingenuity. May and Libby both risk life and limb to reach out to each other, and have complete faith in each other’s abilities, despite the obstacles between them. Not only this, but May teams up with a male computer hacker, and they NEVER ONCE make googly-eyes at each other. There is a love story, but it’s the platonic one between May and Libby.

Princess X has some pretty dark themes; it throws the reader into a young girl’s grief almost from page one, and the motivations of the characters are not sugarcoated. The mystery itself is pleasingly complex for a YA novel, but not so convoluted that it becomes more about the puzzle than about the characters (a complaint I often have about thrillers). Some of the references to brands and technology might date the story a little too quickly, but it suits the overall tone, so I can't really complain. This kind of plot-driven mystery is not my usual cup of tea, but the set-up was too intriguing to pass by, and Priest’s reputation for bending and breaking genre boundaries sealed the deal. It might be one of the most genuinely enjoyable books I’ve read this year.